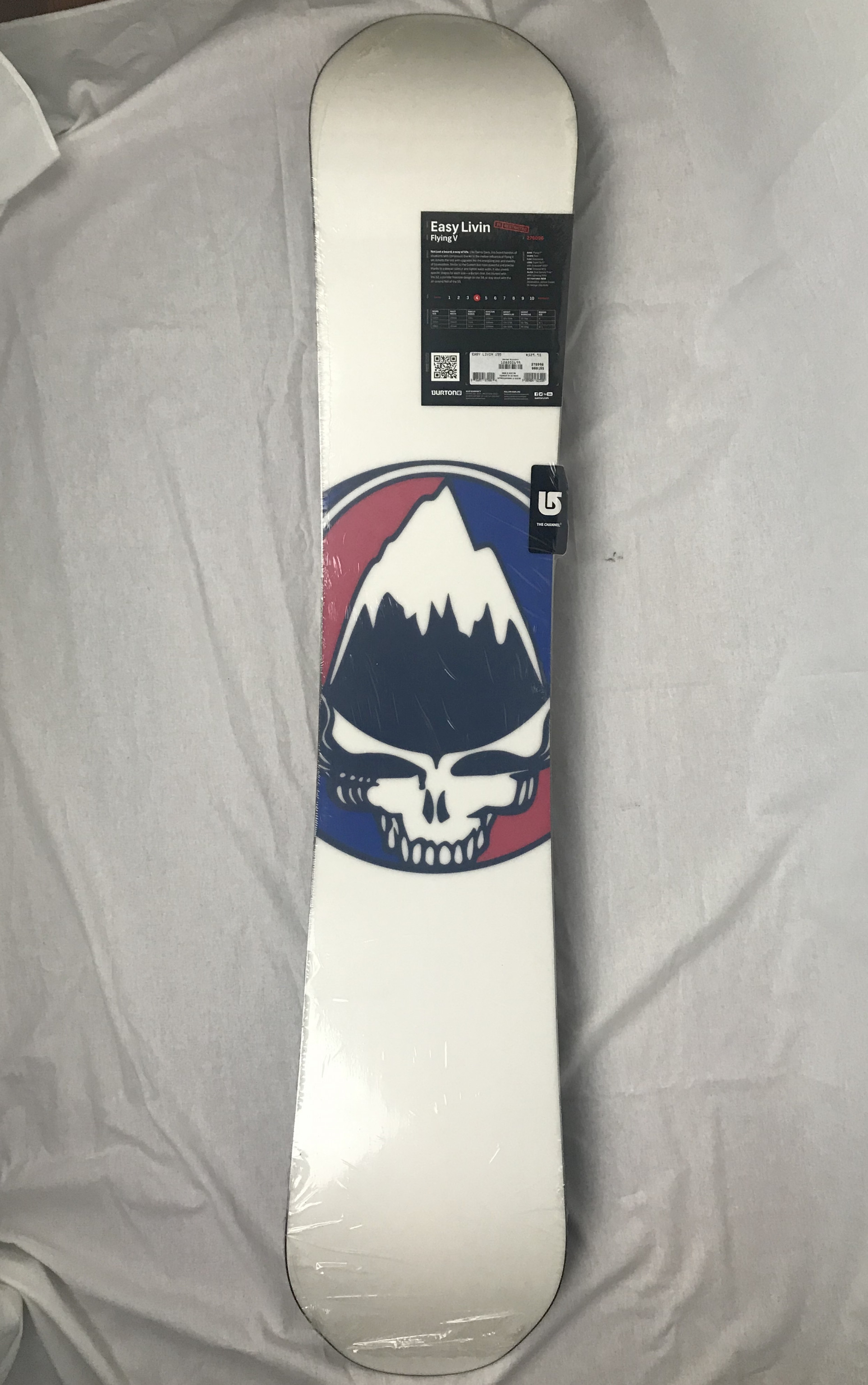 Original Price: $529.95* Your Price: $459—————————————————————————(*This board was gifted to me during a difficult time by a deadhead/then-family member years ago who told me that it was won via Rolling Stone magazine giveaway. I’ve since discovered the original RS sweepstakes announcement[listed below] & learned, although there was 11 winners, there was only one grand prize winner to receive this Burton ‘Steal Your Face’ board(Sweepstakes rules list the original value at $600 despite it being stickered/printed on packaging otherwise by Mfr..)————————————————-————— -A Few Board Details: Feel: 4 Gondola Package The Channel BEND: Flying V™ SHAPE: Twin FLEX: Directional CORE: Super Fly II™ with Dualzone™ EGD™ FIBERGLASS: Dual Density Triax™ Fiberglass with Lightning Bolts BASE: Sintered WFO SIDEWALLS: 10:45™ EXTRAS: NEW Squeezebox, Jumper Cables Hi-Voltage, Frostbite Edges, Ellip Kicks, Pro-Tip™, and Infinite Ride™ [155 size is recommended for weight range of 120-180 lbs..]———————————————-—— -About The Board: This men’s 155, Easy Livin’ Flying V m, all-mountain snowboard is one of three limited-quantity Grateful Dead colorways created in collaboration with Burton & pro snowboarder Danny Davis. All three designs sold out instantly the moment they were dropped, immediately becoming another unique, rare collector’s items/trophies for fans. Of the three(which also include a skull and roses & terrapin station designs), this board features the ‘Steal Your Face’ emblem—a symbol dreamed up by audio engineer/psychedelic outlaw/Grateful Dead-secret-weapon—the “King Of Acid” himself—Owsley Stanley—that would first appear on the cover of their 1976 live double album & become the quintessential logo of the Grateful Dead. These boards have become increasingly rare to come by, let alone in brand new condition &, whether you’re a fan of the Dead or not, I’m offering the item at a steal for purchase as an investment or even just a rare flex out on the snow. —————————————————-———-—— The Grateful Dead are one of the most profitable bands of all time &, arguably, the greatest American live band of all time. In over half of a century, they have amassed one of the most fiercely loyal fanbases that will ever exist; who take immense pride in collecting merchandise/memorabilia(on a level that brings a group-turned-mega-business like KISS to mind). In 2020, 25 years after the passing of icon Jerry Garcia, it was reported that the band had made $250 million—an average of $2.3M a performance—in ticket sales alone in the five year stretch leading up to the new decade. The band’s reemergence was fueled, in part, by a new iteration of the lineup featuring global superstar John Mayer at the helm. The Dead are more popular than they’ve ever been. Anything(/everything) associated with the GD brand is valuable, collected, traded, &/or shown off by their legions of followers & decades of evidence shows there’s hardly any chance of it slowing anytime soon. Add to the fact that, with factors like the rise of social media & the political atmosphere in the U.S. in recent years, people are as divided or conflicted as ever—plus, we’re all living on a dying planet plagued by pollution/corporate greed/the opposite of everything that the Grateful Dead(& their following) was built off of—so it’s a safe bet that more-and-more people will only continue to be drawn to the homegrown, grassroots ethos of the iconic group.______________________________ —Priced to sell immediately. Buy it for yourself, to re-sell, or for someone close to you but buy it quick bc when one of these boards pop up for sale-in any condition-they go ASAP. This item is brand new, in its original sealed packaging, & selling for lower than original list value(as well as $55 less than a recent Geartrade sale of this board in used condition). ****************************************** [Original Article Announcing The Rolling Stone ‘Steal Your Face’ Grand Prize Giveaway: https://www.rollingstone.com/music/music-news/win-a-grateful-dead-steal-your-face-burton-snowboard-86475/amp/