Product Condition: The X-ALP Launch SPD Mountain Bike Shoe - Women's is in Good condition. these shoes were owned for less than a month. they were returned a 2 small stains on the top part of the shoe and some dirt on them. still in good condition and bottoms are clean. sold as is all warranties void.

Riding clipped in doesn't have to mean you're regulated to goofy looking carbon soled kicks that make you walk like a puppy in high-heels. With options like the Pearl Izumi X-ALP Launch SPD Mountain Bike Shoes for Women you'll fly down trails with the power of clipless shoes, but with a sense of street style that passes on the brewery patio when your ride ends and its time for a crisp IPA to cut the summer heat. These style-loaded shoes don't stop there, though, they load you up with adventure-ready technology that can charge deep into the woods to blast berms previously only lapped by elk and rabbits. With a bonded upper your feet will be hugged into place securely, keeping your footing sure on or off of the bike, and rugged soles grip the dirt when you need to hop off the bike to scope out the trail ahead before dropping in.

The X-ALP Launch SPD's set you up with a stiff enough sole, thanks to a nylon composite shank, and serious grip that locks into the trail when you're off the bike. Its built with an EVA midsole that cushions blows from sharp rocks or lofty drops, and Vibram Megagrip outsoles that holds true to the dirt under foot. The lugs are designed with open an chevron shaped pattern, directionally placed to give you braking power in the heel, and propelling power in the toe while maintaining surefooted grip. Even the pedal zone features Vibram Megagrip with siping to keep mud away, so engaging is quick and snappy when you clip in. 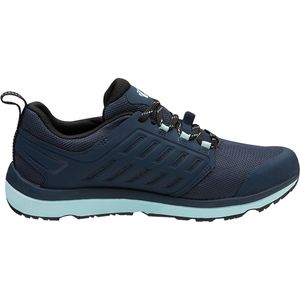