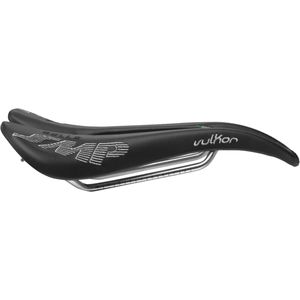 Product Condition: The Vulkor Carbon Saddle - Men's is in Excellent condition. The Saddle - is in Excellent condition. The saddle was previously owned for approximately four weeks. The following observation has been made about this item: "The saddle is very clean and scratch free. There are light clamp marks on the rails from brief use." Item sold as is. All warranties void.

Selle SMP saddles are among our best sellers and it really doesn't come at a surprise since the brand has been building high-quality saddles by hand since 1947. Discerning cyclists are attracted to its lightweight builds, appropriate padding, and unique shapes that yield a comfortable ride. The saddle we have here, the Men's Vulkor Carbon Saddle is based on the Composit shell but drops the padding for those who prefer a firmer feel and want to drop some grams. What remains is SMP's signature drop nose, a design that might look bazar compared to other saddles on the market, but in use, almost all cyclists that have tried it rave about the newly found comfort and end up replacing the saddles on all of their rides.

This Vulkor's carbon-reinforced shell and fixing plates, along with its full-carbon rails and minimal padding build up a saddle that comes in at a feathery 175-grams. Selle SMP adds some raised stitching across the saddle's cover adding a touch of functional grip and a wonderful aesthetic. That cover comes in either soft, real leather on the black model or durable, synthetic microfiber on the white and yellow fluo versions.

The Vulkor sits in the medium to wider shell width in the Selle SMP lineup and the firm uses the cyclist's pant size as the recommended sizing structure when selecting a saddle. That being said, if you're between a 32-37-inch waist size, chances are good that the 136mm wide Vulkor will work for you. It does eschew padding altogether, so it's for the type of rider who prefers to feel as much of the road as possible or just let your chamois handle the padding duties.

The saddle's sloping nose provides a flat base to support the ischium while alleviating pressure on sensitive bits, regardless of your saddle to bar differential. The Vulkor also features SMP's pronounced central channel, which further reduces pressure on the pudendal nerve and surrounding soft tissue. The raised tail helps coach the hips into a forward rotation for more efficient pedaling, a position that also keeps body weight divided between the rear and lower part of the ischial tuberosity region. This shape also helps reduce overall pressure on the coccyx while riding over rough surfaces so you can sit in with the bunch and launch a well-timed attack over the pav sectors that define your rides or races.