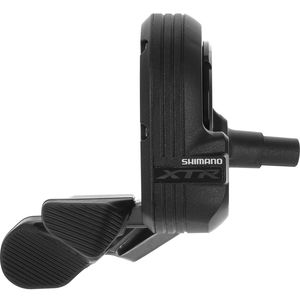 Product Condition: The XTR Di2 SW-M9050 Shift Lever is in Excellent condition. The Shimano XTR Di2 M-9050 Shifter is in Excellent condition. The shifter was previously owned for approximately 2 weeks. The following observation has been made about this item: "The shifter is very clean. It does not appear to have been installed or use. The firmware has been updated to v3.3. Connection wires are not included." Item sold as is. All warranties void.

While shift levers tend to get the most attention in mechanical drivetrains, Shimano's XTR Di2 SW-M9050 Shift Levers aren't the real headliners. That honor falls to the derailleurs. The shifters are just the messengers, serving as intermediaries between you and the solenoid situated in the derailleur, which actually drives the shift. Still, the levers do benefit from some classic Shimano R&D attention in order to ensure that the messenger delivers its missive quickly and accurately so the derailleur can do its work. In effect, the SW-M9050s are the middle managers of the most â€” for lack of a better word â€” perfect shifting we've ever experienced on a mountain bike.

The levers' most appreciated technology, ominously titled Firebolt, is the cycling equivalent of being a trail-destroying sorcerer; but instead of eliminating terrain with fire balls from your fingertips, you'll use Firebolt to shift with magically effortless precision â€” even while navigating the funkiest terrain. The ergonomic placement of the lever paddles keeps this unnatural power right at your fingertips.

The shift paddles' feedback is also a selling point, as there's a noticeable click when you shift. One of our few critiques of Shimano's road Di2 groups is that the subtlety of the shifters' action means there's no positive feedback. Not so with XTR's Di2. When you shift, you know it.

As with other Shimano Di2 bits, the XTR SW-M9050 levers are compatible with Shimano's rust-, stretch-, freeze-, and generally worry-free E-Tube wiring system. Its modularity makes it easy to set up on virtually any frame, though it does cohabitate with less friction when the frame is built with Di2 in mind.