Product Condition: The Evolution Saddle - Men's is in Like New condition. saddle has no packaging. brand new

The Selle SMP Evolution Saddle came to the market well ahead of the demand for all-in-one, mixed-terrain cycling equipment, however, it's well placed to satisfy the versatile, modern rider. Designed with a carbon reinforced nylon shell, the Evolution braces against both off-road trail-chatter and the unavoidable pothole impacts while doing turns in the pace-line. The narrow width and minimal padding of the Evolution align it with narrow-waisted riders who also place a high-level of scrutiny on chamois quality and density. For those seeking a more traditional amount of padding and slightly wider stance, we suggest the Selle SMP Stratos.

Selle SMP uses an open center channel that runs nearly the full length of the Evolution to relieve pressure when seated. A formed divot at the center of the saddle helps maintain a center-weighted riding position, although sitting atop the nose of the Evolution is possible if you need to maximize power output during breakaway attempts or triathlons. And at 260 grams, the Evolution makes hitting race-weight a skosh easier. 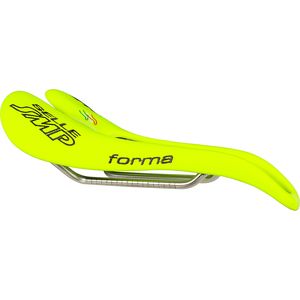