With the advent of the XT Di2 RD-M8050 Rear Derailleur, Shimano's Di2 has finally come to Deore XT, which may be the most popular drivetrain model in the world. The XT version is built for more aggressive terrain, features a much friendlier price point, and actually represents an upgrade on XTR in some ways.

One of the biggest changes to XT's version of Di2 is that it now wirelessly connects to Shimano's E-Tube platform via Bluetooth. That means that you can initially set your drivetrain up at home with a computer or tablet and then make targeted adjustments using your smartphone while you're on the actual trail. We don't need to explain why this is so huge, and we fully expect it to break the typical product cycle model by trickling up to XTR.

The XT Di2 rear derailleur does benefit from some trickle-down tech, including the Shadow RD+ switch and Synchronized Shifting. Shadow RD+ is the same toggle switch on the mechanical version. It lets you lock the derailleur in place, maintaining chain tension across funky terrain to eliminate chain slap and ghost shifting. Avoiding ghost shifts is especially important here considering the fact that the second feature, Synchronized Shifting, serves as a drivetrain babysitter by synching the front and rear derailleurs to ensure you're always in an optimal gearingâ€”obviously not terribly useful if you're running a one-by rig.

By putting the two derailleurs in communication with each other, Synchronized Shift can actually calculate your efficiency and perform simultaneous front and rear shifts to eliminate cross-chaining and set you up in the best chain line for any given gearing. These shifting patterns depends on the direction you're shifting and the combination you're shifting into. They're wirelessly programmable via Shimano's E-Tube system, so you can set your preferences in advance to ensure that your internally-communicating drivetrain isn't conspiring against you.

Another category of big winners in the Synchronized Shift game are short cage derailleurs, which the system protects by making sure you never run out of chain when cross-gearing; it just adjusts the front and the rear to give you the gearing you want without tearing your derailleur off. Still, if you decide against Synchronized Shifting, then you can turn it on or off as your preference demands.

The shifting itself is peerless, as the derailleur always knows where it is, so its travel isn't restricted or lengthened by imperfect cables. It situates the chain squarely on every cog and it jumps between those positions with startling speed. No hesitation, no grinding. Ever. And since Shimano builds the XT Di2 derailleur with a motor that's twice as powerful as its road counterparts, it'll always have the extra oomph necessary to maintain seamless, accurate shifting even when inhibited by a healthy accumulation trail muck. 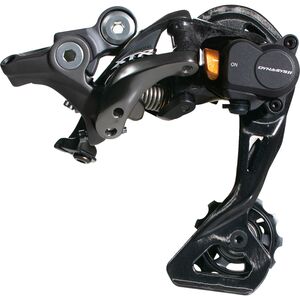