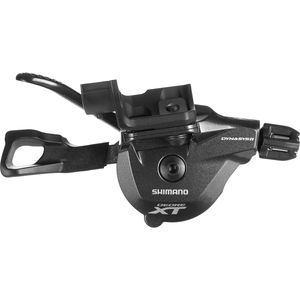 Borrowing much of its technology from crme de la crme XTR shifters, the Shimano XT SL-M8000 I-Spec II Trigger Shifter offers the razor-sharp shifts and ergonomic feel of its racier brother, but at an affordable price that only sacrifices a few grams. Despite being friendly on your wallet, the M8000 Shifter commands precise gear shifts with the astounding durability known to Shimano's XT M8000 group. This particular version benefits from its I-Spec II integrated mounting system, which cleans up your cockpit with the use of newer XT and XTR brake levers. This clean mounting system also saves a couple of grams while increasing the range of angular adjustability to your particular liking.

Shimano designed the M8000 to command control over the wide range of gears found on their newest 11-speed drivetrains. It's revamped with a longer lever body for easier shifting with less force required to initiate the shifting mechanism. The anti-slip surface on the main lever improves tactile feel while lessening the likelihood of slipping out when critical shifts are needed in demanding terrain. These features, combined with a new shift cable covered in a low-friction coating, create a 20-percent reduction in force required for gear shifts. Ultimately, this translates to less fatigue of your fingers while you're riding for hours on the trail.

For even better shifting, the M8000 features two-way release that permits you to shift the upper lever with either your thumb or index finger, depending on where your hands are situated on the bars. Multi-release functionality provides the ability to shift through multiple gears with the single sweep of a lever while the instant release design ensures the proper gear is selected the instant you throw the lever.